Genius of the Ancient World

Timeline Television North worked with BBC Religion & Ethics for the picture and audio post-production for the 3 x 60-minute series of Genius of the Ancient World. Hosted by Bettany Hughes investigating the revolutionary ideas of three giants of ancient philosophy: Buddha, Socrates and Confucius.

How it was done: Turning very complex subjects into a stunning watch was the main objective. Offline editor Ivan Probert used avid media composer to craft the three stories. Genius of the Ancient World was shot predominantly on the Sony F5 in S-Log. Before beginning the grade we produced a custom LUT in Da Vinci Resolve for the F5 sequences to provide a level playing field in which to start. Once this had been done the S-Log material was graded by colourist Trevor Brown both in warm and with high saturation to support the beautiful narrative. This was achieved using a mixture of custom curves and windowed keys to maintain consistency across not only the many different weather conditions, but also between F5 in S-Log and Linear, and C300 in hyper gamma to produce a seemless piece. Online Editor Sion Roberts completed the visual feast using avid symphony for the online and created titles, VFX and credits using Blackmagic’s  Fusion to great effect.

Dubbing mixers Richard Lee and Dan Piggott provided the final layer of the story, using the deeply textured sound recordings from each location to enhance the atmosphere of the programme. The use of protocols 11 came in to it’s own, when the sound on location began to make it difficult to hear Bettany and follow the story. 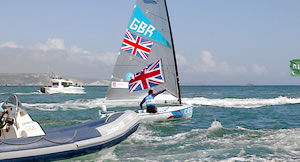