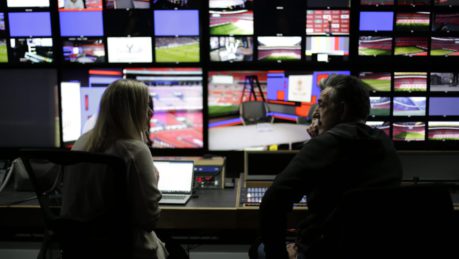 The UK-based technical services provider Timeline has installed a new remote production hub at its facility in Timeline North, in MediaCity, Salford.

Timeline was one of the first post houses to set up base in MediaCityUK 10 years ago, where it provides post production for the likes of BAFTA award-winning The Dumping Ground, and BBC Sport documentaries including Marcus Rashford: Feeding Britain’s Children.

The Timeline North hub includes a gallery, sound, graphics and VT and makes use of remote surface control panels, linked to, and driving equipment installed in, OB trucks on site.

It was devised for BBC Sport’s FA Cup contract and used for the first time during live coverage of the semi-finals (16-17 April 2022).

The hub, which is connected by a diverse 10GBps fibre to Timeline’s new Ealing Broadcast Centre, in London, is now being made available to other broadcasters and producers to use, including those who want, or need to have crews split between London and MediaCityUK during a production.

Commenting on the expansion Dan McDonnell CEO says: ‘We’re delighted to be expanding our offering in the North and enabling productions to have the flexibility of working either in the North, South or a hybrid of the two. The benefits of having remote production hubs are countless including reduced travel and hotel costs for production crew coupled with well-being benefits of a better work/life balance, with crew able to work closer to home. We’re looking forward to using this model for more productions going forward’.