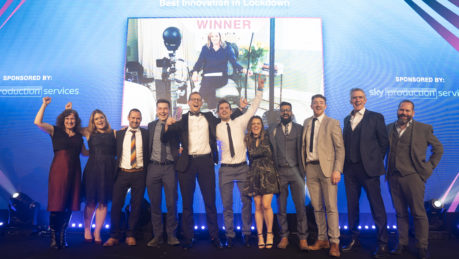 London, United Kingdom, 01 December 2021 – At last night’s ceremony, Timeline was presented with two prestigious Broadcast Tech Innovation Awards. Including the Best Innovation in Lockdown for its Stream Anywhere App as well as the Young Talent of the Year (Production) award in which Jack Comerford jointly won alongside Cara Houghton.

The Broadcast Tech Innovation Awards celebrates the exceptional teams behind the most outstanding broadcast productions of the past year. The Awards is now in its third year after a sell-out gala celebration in year one and a successful virtual award ceremony last year. Focusing on the teamwork behind the productions, highlighting the outstanding creative and technical aspects of the projects, the award is made up of 24 categories and the night sees more than 400 members of the industry come together to celebrate the winners.

“Last night saw the well-deserved recognition of some of the industry’s most talented teams who work tirelessly behind the scenes to deliver the most innovative and creative productions throughout the year. After such an uncertain year, it was incredible to be able to all come together to celebrate and recognise these individuals.” says Broadcast Tech & Sport Group editor Jake Bickerton.

This year’s awards took place at The Brewery in London and was the last event in the Media Business Insight (MBI) event calendar for 2021. Hosted by the very talented comedian and actor Kerry Godliman, the night certainly provided the close to the year the industry needed.

The awards are judged by some of the industry’s biggest names – the winning work are a celebration of the most innovative, interactive, and creative work of the past year.

‘We’re delighted to have received two Broadcast Tech Innovation Awards. As the world went into lockdown, we soon realised our Stream Anywhere App had the potential to enable shows to be broadcast in a Covid safe way. Working on everything from BT Sport’s MotoGP to Formula E and even major film recces it’s been a huge success. It’s amazing to see it get this industry recognition. I’d like to thank the Timeline team for rallying together to assemble kits at pace and to our clients including BT Sport, Whisper, Formula E for their collaboration and trust.’ saysTimeline Television’s CEO Daniel McDonnell.