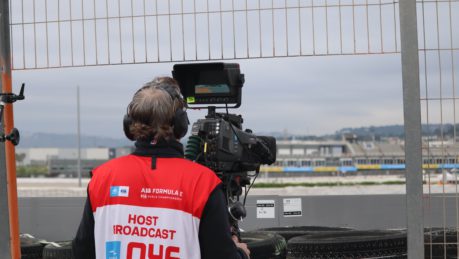 April 2021 saw Timeline TV have one of its busiest weekends ever as it worked simultaneously on Formula E, Sail GP, Premier League, National League, Women’s Super League and the Women’s Six Nations coverage.

The base for the big weekend of sport (24-25 April) was split between Timeline’s Ealing broadcast centre and BT Sport’s Stratford production hub and involved a combination of completely remote production, decentralised production, and traditional OB, the latter involving all the vehicles in Timeline’s fleet, and connectivity ranging from 4G mobile contribution and internet to satellite and dedicated full-fibre.

“We had three large scale remote productions in our Ealing Broadcast Centre all happening at the same time. They were all slightly different in their approaches, but it’s a clear indication of the way that the industry is moving”

Weekend activity at Stratford saw Timeline involved in coverage for two English football leagues, when it helped provide remote production for the National League (BT Sport). It was also involved in a mix of traditional OB broadcast and a decentralised remote operation for coverage of the English Premier League (Sunset+Vine for BT Sport). 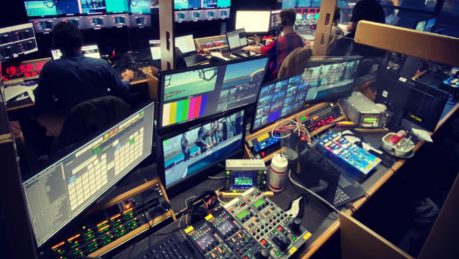 On the Sunday, every room in Ealing was being used including five galleries, fifteen edit suites, five voiceover booths, three VT areas and a large graphics area. The company’s tested model of a remote production hub saw Ealing receive all the raw cameras feeds from the remote locations before using separate galleries to produce the various world feeds.

“We had three large scale remote productions in our Ealing Broadcast Centre all happening at the same time,” says Daniel McDonnell, managing director at Timeline TV. “They were all slightly different in their approaches, but it’s a clear indication of the way that the industry is moving.”

While Timeline is a leader in remote operations, it still followed long-established OB methods for some jobs over the weekend. “We were doing the Women’s Six Nations final, and various other traditional OBs, in the normal manner,” says McDonnell, but for the football games in the Women’s Super League, there were no OB trucks at the grounds.

“All that goes to site are the cameras,” notes McDonnell. “We do a live WSL match through remote production using multiple cameras, and have live single cameras at some of the matches. We’re using 4G technology and dedicated fibre to the grounds to send the signals back and from there it’s a complete remote production.”

The gallery, the EVS, the graphics and media management are all in Ealing, used to make the weekend Women’s Football show for the BBC and also deliver all the world feeds to the FA.

“The Premier League, which we do for BT Sport is a mixture of on-site OB production and remote production,” McDonnell says. “We bring a large proportion of the cameras back over the BT dedicated fibre into Stratford where the production is delivered.”

On the other hand, the National League is a complete remote production solution that Timeline has been working with BT Sport on for several years.  “That has a small facility truck on site from which we set the cameras up,” says David Harnett, Timeline TV head of operations. “All the cameras get sent back to BT Sport’s broadcast centre, and all of the production is remote. The only people on site are the presenters, and the technical staff to set the cameras up, and obviously the camera operators.” 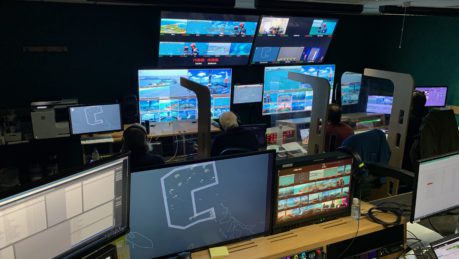 It’s not the first time that international SailGP racing has been covered by Timeline, but this time the on-site operations had been further scaled back due to COVID restrictions and the remote production model expanded, as well as there being 30 more broadcasters to supply feeds to.

“We will always have experts going out there but we had a very limited number of engineers on site, the setup was done and then the feeds were brought back,” says McDonnell. “Sitting in Ealing controlling [cameras on a boat] by fly by wire when you’re a remote operator is not quite the same experience when you’re on the shore, because there is a slight latency, but it’s quite a small compromise, and the benefits are that we can scale up and have more boat operators.”

Timeline has a contract with Tata for full-fibre links for SailGP. “We put the connectivity in to serve the venues well in advance of time,” McDonnell explains. “We’re very lucky to have the Tata fibre; we could really push the quality and the latency.

“We offered tailored language feeds for different broadcasters,” he continues. “We had one director directing the race, but when they cut for instance to the live water graphics, different rights holders got a bespoke feed of that language substituted. We were generating a French feed, a Spanish feed and a Japanese feed, and all these feeds were able to have bespoke graphics and wipes and AR graphics. Then we delivered to the broadcasters via BT Tower or via different fibre methods. Because it’s remote we can scale that to as many broadcasters as needed for those services. To do that on an OB would be really difficult.” 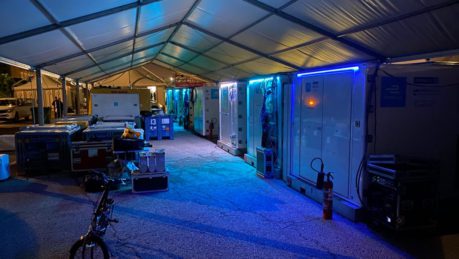 “Formula E has a similar [set up] to SailGP except that it’s a hybrid model, so they have an on-site presence,” says Harnett.

Timeline handles the on-site too. “We do the whole host operation, we do all the track cameras, all the onboard and radio cameras,” adds Harnett. “What changed this season was we took the English operation and rights holders operation, and moved them offsite into the Ealing broadcast centre.”

Tata provides dedicated full-fibre links from Ealing all the way to the country that the Formula E race takes place. “That last milestone, country to site, is over an internet hop,” says Harnett. “It’s still significantly better than if you’re doing the internet the whole way, but we have to make sure we have more error correction, and some disaster recovery scenarios to get through certain locations.”

On the Sunday, every room in Ealing was being used, including five galleries, fifteen edit suites, five voiceover booths, three VT areas and a large graphics area.

“We started planning for it several months ago,” says Harnett. “We saw that it was going to be a very busy weekend. When we saw how many more people were going to be arriving we had to plan out every room.”

“We’re always open to expansion plans, so I’m sure we’ll be launching more galleries as the trend continues,” says McDonnell.

According to Harnett, the company has almost up all existing free space at Ealing. “We pivoted during COVID, changing what were our offices into additional gallery spaces,” he says. “We put in all the redundancy feeds and backup power and all that sorts of infrastructure with Formula E in mind.

“We’re now spread across three different buildings on the Ealing site,” he continues. “We had SailGP going on in one building, we had the WSL going in another building, and we had Formula E running over in North Block. Especially with the large scale productions, we want them to feel like the space they have is their own while they’re renting it, and they’re not bumping into opposing production companies or sports.”

COVID adds an extra element to the complexities of a big weekend like this. “However it’s more manageable in the broadcast centre,” McDonnell says. “We were spread out over several floors, we had COVID-safe screens, we could control who can access what, we could make sure people aren’t crowded in kitchens and so on. On an OB it’s very hard to do all that when using a portacabin or trucks.”

There has been large scale development in technical infrastructure to match, including a big investment in both connectivity and codecs.

“We had multiple feeds coming in, over 60 or 70 individual cameras from all the various sports over the weekend,” McDonnell says. “With all of the OTT we were doing, the streaming, the FA player for the FA, and the SailGPs app, we had at least 40 outgoing lines. So we’ve had to scale up connectivity across all our different providers: BT, Tata, and NEP Connect. We had put in associated encoding equipment to do the different operations. Obviously the training of the staff to support all of that has kind of goes hand in hand with such a large scale development.”

Harnett points out that Timeline finds huge benefit in providing an end to end service. “A lot of other companies will go to Tata and get a managed service connection, and that’s a great way to work,” he says.  “However we find that by being able to provide a majority of the encoding and decoding equipment you get so much more control over your technical production. It just gives you so much more flexibility to deliver the shows and create a great result.” 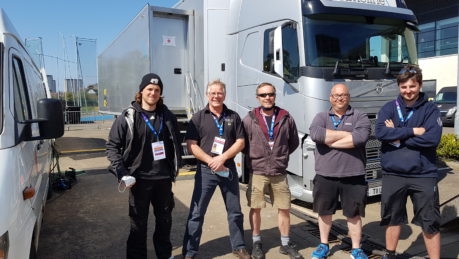 Another facet of the weekend was having users linking into the production from elsewhere in the world. “Across all the programmes we had various remote users who were not in Ealing,” says McDonnell. “Remote production doesn’t require everyone to come to Ealing to work. We have remote users working on SailGP in New Zealand, in Australia and in America, we have remote users on the Formula E working from Barcelona. We also had remote users in the UK.

“Due to COVID and the fact that flying people from Barcelona or Australia to Ealing is not a great use of the world’s resources, once you’ve got the feeds back into your central broadcast centre, you can then offer those ‘remote remote’ users [that facility],” he adds.

“Every remote user needs talkback; whether that’s through extending our VoIP talkback circuit or whether it’s via apps, we have multiple ways to do it. Then they need to obviously see the broadcast, so we’ve developed really low latency feeds that we can deliver to large amounts of people. Remote users can get multi viewers, they can get the programme, they can get audio. If they are controlling something like a graphics terminal, they also need a control, but by delivering all of those elements over the internet, we can offer a very good experience. We’ve been doing this since the start of lockdown now and we have had very few problems with remote users.”

Harnett feels this use of both centralised and decentralised remote production is the way forward.

According to Harnett, the weekend went successfully. “When everybody is trying to push as hard as they can to get that many shows done, that is really a big success,” he adds. “My measure of that on any productions we do is when I stop thinking about the technical side and start watching the content and enjoying it. That certainly was the case across the weekend with all those shows.”

And will there be more bonanza weekends? “We’ve already ascertained another couple of big clash weekends,” says Harnett. “We’ve already started the planning for them now.”

Find out more about our Ealing Broadcast Centre and our Outside Broadcasts.