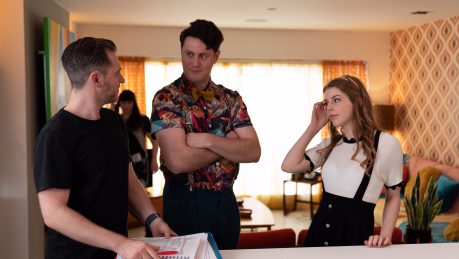 The Amelia Gething Complex is a brand-new comedy series starring online sensation Amelia Gething. The flatshare comedy was filmed at locations around Greater Manchester, including The University of Salford and Big Shed studio.

Timeline North provided post-production facilities, featuring a host of weird and wonderful special effects including wormholes, a world of talking coats, and a pineapple giving birth!

The show produced by BBC Children’s Productions Ltd is now on BBC iPlayer as a box set and aired on BBC Two on 2nd November.

The Series Producer is Graham Davies, the Director is Scott Peters and the show is Line Produced by Emily Morgan.

Executive Producer and Genre Lead for Children’s Comedy and Entertainment Sid Cole said: “We can’t wait to see what the audience make of it. Amelia is an incredible new talent to the BBC and we’re delighted to make such a distinctive and different comedy show with her taking the lead.’